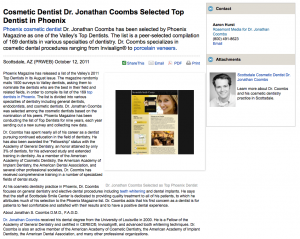 Phoenix cosmetic dentist Dr. Jonathan Coombs has been selected by Phoenix Magazine as one of the Valley’s Top Dentists. The list is a peer-selected compilation of 169 dentists in various specialties of dentistry. Dr. Coombs specializes in cosmetic dental procedures ranging from Invisalign® to porcelain veneers.

Phoenix Magazine has released a list of the Valley’s 2011 Top Dentists in its August issue. The magazine randomly mails 1500 surveys to Valley dentists, asking them to nominate the dentists who are the best in their field and related fields, in order to compile its list of the 169 top dentists in Phoenix. The list is divided into various specialties of dentistry including general dentists, endodontists, and cosmetic dentists. Dr. Jonathan Coombs was selected among the cosmetic dentists based on the nomination of his peers. Phoenix Magazine has been conducting the list of Top Dentists for nine years, each year sending out a new survey and collecting new data.

Dr. Coombs has spent nearly all of his career as a dentist pursuing continued education in the field of dentistry. He has also been awarded the “Fellowship” status with the Academy of General Dentistry, an honor attained by only 3% of dentists, for his advanced study and extended training in dentistry. As a member of the American Academy of Cosmetic Dentistry, the American Academy of Implant Dentistry, the American Dental Association, and several other professional societies, Dr. Coombs has received comprehensive training in a number of specialized fields of dental study.

At his cosmetic dentistry practice in Phoenix, Dr. Coombs focuses on general dentistry and elective dental procedures including teeth whitening and dental implants. He says that the staff at Scottsdale Smile Center is dedicated to providing quality treatment to all of his patients, to which he attributes much of his selection to the Phoenix Magazine list. Dr. Coombs adds that his first concern as a dentist is for patients to feel comfortable and satisfied with their results and to have a positive dental experience.

Located at 7125 E. Lincoln Drive, Suite 106 in Scottsdale, AZ, Scottsdale Smile Center can be contacted at (480) 304-7649. The practice can also be reached online via the website scottsdalesmile.com or facebook.com/ScottsdaleSmileCenter.

Back to Full Blog